Under the header ‘less is more’ architects Denc! Studio, DUCO and Lapeirre Woningbouw pulled out all the stops in order to create a solidly designed residential concept in Nevele in which modern architecture goes hand-in-hand with energy-efficiency, with people at the core of the design. 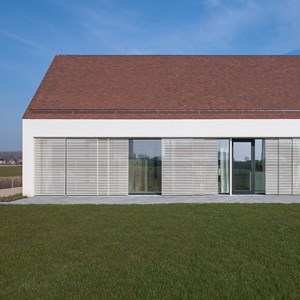 A sleek, sustainable and airtight home with a specific emphasis on the indoor climate is proving increasingly attractive to prospective builders. Consequently, architectural firms and construction companies also need to respond to this fast growing trend. Under the header ‘less is more’ architects Denc! Studio and Lapeirre Woningbouw pulled out all the stops in order to create a solidly designed residential concept in Nevele in which modern and timeless architecture goes hand-in-hand with energy-efficiency, with people at the core of the design. High time then to take a closer look at this wonderful inspirational home to which DUCO also made a significant contribution.

Frequent travellers along the E40 motorway will not only be familiar with the striking KBC Arteveldetoren near Ghent; the new Lapeirre Woningbouw show house in the rural setting of Nevele also forms a clear landmark for passing traffic in the middle of green fields. The derelict building that once served as a farm dwelling underwent a major transformation in January 2015 but the end result is without doubt truly stunning.

Isabel Lapeirre, manager of Lapeirre Woningbouw and builder of the new construction project says: “The design of a show house is a complex quest for what the prospective builder really wants and the skill is, therefore, to develop a concept tailored to your client. The location meant we were tied to planning restrictions and it was a real challenge to make a simple housing unit still look attractive and striking without neglecting the current energy standards and a comfortable indoor climate. In order to comply with all these requirements we made a conscious decision to remove the existing farm property and create space for a dwelling with a single level, following the old building plan. The combination of, amongst other things, whitewashed facing brick, reddish brown tiles and black aluminium windows creates a modern, fresh farm dwelling.”

Lapeirre Woningbouw has recognised how fundamental large areas of glazing are in contemporary architecture. Thus, virtually the entire rear façade is built using large areas of glazing which creates a unique view of the surrounding area. A glass façade also allows a great deal of natural light into the home but this can soon give rise to all manner of discomforts for the resident. What about privacy for example? What’s more, large areas of glazing draw in too much heat in the summer and the rising or setting sun can be a nuisance in transitional seasons. After the necessary study it seemed appropriate to choose external solar shading.

Putting people at the core of the design

“When realising an optimum indoor climate, solar shading also plays a key role in addition to heating, cooling, ventilation and lighting,” according to Isabel Lapeirre. “Solar shading prevents nuisance light and reflection. In addition, it keeps the heat outside and reduces the need for cooling. Not only does this ensure a pleasant indoor climate but also lowers energy bills. And this was precisely the intention of Lapeirre Woningbouw when it came to delivering a powerful energy concept as an energy-efficient contractor. Thanks to DUCO, very early on we were able to consider external solar shading as a concrete option.”

“The choice to team up with DUCO was a done deal for us very quickly indeed,” continues Lapeirre. “So, we consciously chose not to go down the route of classic solar shading based on textile or screens but instead to work with an architectural solar shading system. Because we were particularly drawn to the building plans for a home in Ichtegem thanks to the functional and aesthetic added value afforded by DUCO’s solar shading systems, this solar shading manufacturer was the appropriate choice for this project. After all, the company is in the business of providing solutions, not products, for a pleasant living environment, putting people at the core of the design.”

DucoSlide: functional and aesthetically pleasing too

In close consultation with DUCO, Lapeirre Woningbouw opted to use DucoSlide, an architectural solution with sliding panels which fits seamlessly with the inspirational concept of the show house. In addition to maintaining daylight and assuring maximum privacy the horizontally installed aluminium louvre blades ensure not only a substantial reduction in the heat in the warmer times of the year naturally. They also let in the heat from the low sun during the colder months, resulting in the optimum energy gain.

These days solar shading is no longer strictly functional but also increasingly a more aesthetically pleasing option. “And here too DucoSlide fits just right,” says the spokesperson for Woningbouw Lapeirre. “This solar shading system lends the façade a unique touch thanks to its sleek, rectilinear design. Choice of frame profile is the SlimFrame, whereby the discreet and elegant side profiles proved popular. In addition, DucoSlide also brings added dynamism to the façade thanks to the sliding sections that make up a playful and fascinating interaction with the strict architectural lines. An additional plus point was the fact that the DucoSlide louvre blades could be painted in the same colour as the whitewashed facing brick!”

Completed and officially presented to the general public in the autumn of 2015, the new Lapeirre Woningbouw show house can quite rightly be regarded as the reference point in the region for many prospective builders. “Thanks to the open and efficient cooperation between the various links it was possible to achieve an inspirational show house with a healthy and comfortable indoor climate and which stands out on account of both its balanced, architectural form and its energy consumption. With an energy level which is way below the current standard, this house is more than fit for the future already,” concludes a satisfied builder.