A successful indoor climate concept came about in Atheneum Pegasus thanks to the symbiosis between all the stakeholders, including DUCO, who with its architectural solar shading has given the façade added cachet, as well as contributing to an optimal learning environment plus a focus on energy efficiency. 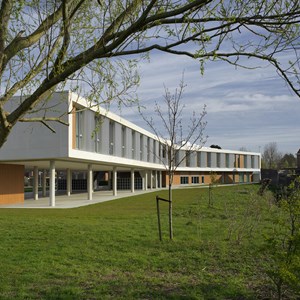 In the autumn of 2014, the first sod was cut in the West Flanders seaside resort of Ostend for the construction of an impressive school complex. In order to cope expeditiously with the steady growth of Atheneum Pegasus, pupils and teaching staff were able, thanks to close cooperation between the stakeholders, to settle into the snazzy, elongated newbuild wing after scarcely one year. The design was handled by Urban Platform, whose main driving forces were sustainability and energy efficiency, as well as focusing on indoor climate.

Close to the centre of Ostend, it is not only pupils and teaching staff, but also architecture enthusiasts and casual passers-by who are now able to marvel at the new school building at the Atheneum Pegasus site. A secondary school is perhaps not the first place where we might expect to find a unique piece of architecture. Design is often costly and budgets in the education sector are not usually of a nature such that top-flight architecture can get a look in. It proved otherwise with Atheneum Pegasus thanks to support from the Flemish Government.

The attractive façade conceals a multifunctional building consisting of two blocks with 1,920 m² of total floor space, which is capable of accommodating around 600 pupils. Every space has been put to optimum use, such that classrooms, toilet facilities, cycle parking, a first-aid room, management offices and a multipurpose covered outdoor space were able to be included in the layout.

“Besides being endowed with characteristic architecture, the newbuild wing is above all highly sustainable, added to which there is also the healthy, comfortable and energy-efficient indoor climate”, according to Tina Van Meenen, an architect at Urban Platform, a Brussels-based firm. “We are all aware of the fact that a great deal has been said and written about air quality in schools, but when all is said and done, we have little to show for it. That is why we wanted to make a statement with Atheneum Pegasus for other school governing bodies, that there is another way of doing things too.”

It was thus decided to go for good insulation, large windows to allow sufficient light in, an air heating system, a ventilation system with heat recovery and an efficient solar shading system. The last of these is worth a few extra words of explanation.

Solar shading: so much more than just decoration

Solar shading is usually viewed as the poor relation of the construction industry. And Urban Platform believes this is not right. “Solar shading after all is so much more than a bit of decoration”, explains Ms Van Meenen. “This is because, in addition to embellishment, it is capable of controlling light and heat coming in as well as heat loss through the transparent elements (windows), bringing about substantial energy savings and a stable, pleasant indoor climate.”

With the proliferation of solar shading systems, it is becoming very difficult for many architectural firms nowadays to be able to see the wood for the trees. Determining the right exterior solar shading system based on an in-depth study using 3D simulations was quite a task in itself.

It emerged clearly from the solar shading study that a system using fixed louvre blades mounted vertically in the form of DucoSun Ellips achieved a higher score time after time than other systems, even when simulating summer conditions.

“This solar shading system, in which a blade with of 300 mm was chosen, guarantees not only maximum daylight, thanks to the optimal inclination angle and number or louvre blades”, the architect continues. “At the same time, DucoSun Ellips 300 ensures that the sun’s rays do not get a chance to heat up the Atheneum Pegasus interior spaces directly. This means that a heathy as well as comfortable learning environment is invariably created, regardless of the position of the sun! What is more, the decision in favour of this system was also dictated by the attractive cost package, and its user and maintenance friendliness. The fact that this system was also somewhat more daring in architectural terms than mere cladding with solar shading, was the icing on the cake.”

“It is quite clear that Atheneum Pegasus is much more than an architectural gem. This is about a successful indoor climate concept that came about thanks to the symbiosis between all the stakeholders, including DUCO, who with its architectural solar shading has given the façade of both wings added cachet, as well as contributing to an optimal learning environment plus a focus on energy efficiency. This newbuild project thus meets the applicable requirements for schools”, concludes an upbeat Tina Van Meenen.