Discover below why De Amazones won the Den Bosch Architecture Award for the most talked-about project built in the period between 1995 and 2015. An accomplishment that, as a partner on this project, DUCO can also be justifiably proud of! 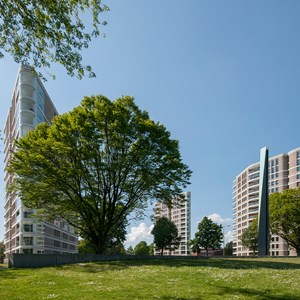 Looking out over the Prins Hendrikpark and bordering the lake de Ijzeren Vrouw we find the striking apartment complex De Amazones standing there since early 2015, an architectural pearl on the edge of the historic inner city of Den Bosch. With explicit elegance and the health of its occupants as the starting point, the three tower blocks stand out clearly in this part of the city. To gather more information, we consulted Dok architects who were responsible for developing this complex.

The 44-metre-high Amazones buildings range between 106 and 127 m2 of living space, housing more than ten luxuriously appointed dwelling units, spread over 13 floors, and an underground car park. Located by the lake ‘de Ijzeren Vrouw’ [Iron Lady] on the former Agricultural College site, the apartment complex fits in seamlessly, architecturally speaking, with its rounded feminine shapes. In keeping with the overall intent, the three tower blocks were named “De Amazones” [The Amazons], a reference to the warrior women in Greek mythology.

Architect Liesbeth van der Pol kicks off: “Due the strong protest from the neighbourhood against high-rise building we were obliged to come up with an appropriate design. That is why we chose for a sleek façade for the side facing the city and the apartments are positioned such that they all have a good relationship with the park and the lake, and hence with nature.”

‘Natural’ building is enjoying strong growth in the Netherlands. More and more architects are consciously opting for healthy and natural technologies. In this vein, achieving the optimum indoor climate by natural means adhering to System C principles is a hot item these days. Accordingly, indoor air quality has a crucial impact on the quality of our health. An agreeable indoor climate however is not a superfluous luxury for the occupants, which is certainly the case where large areas of glazing are involved.

With that objective in mind, at the end of 2008 Dok architects called in DUCO, the ventilation specialist, to translate their wishes into a well-thought-out indoor climate concept. “The architects’ firm and DUCO were on the same wavelength from the outset, which meant that the project came about in a completely ‘natural’ manner”, claims Ms van der Pol. “In order to be able to deliver customisation, the trick is to sit round the table with those involved at as early a stage as possible. In this way you will create a solution jointly that will meet the owner’s and the occupants’ wishes perfectly. Throughout the entire process DUCO provided expert advice and solid support, providing De Amazones with a concept that had been applied already countless times in the Netherlands!”

DUCO responds to the requirement to create a healthy as well as (acoustically) comfortable indoor climate by using self-regulating window ventilators in the form of DucoFit 50 ‘SR’, DucoMax ‘SR’ and GlasMax ‘SR’. “DucoFit 50 ‘SR’ lends itself perfectly for use on the lower floors of the tower blocks whereas DucoMax ‘SR’ and GlasMax ‘SR’ window ventilators are eminently suitable at heights between 20 and 40 metres”, say Dok architects. “DUCO window ventilators after all are highly suitable for use in situations involving moderate noise levels, as is the case with De Amazones due to the roads in the surrounding area. In addition, the built-in ventilators are barely noticeable in the windows or sliding patio doors, which is a substantial additional benefit for the occupants.”

The project has since been completed for some time and this merits an in-depth evaluation by architect Liesbeth van der Pol: “When we were designing De Amazones we had one clear objective in mind: to bring about a sound residential concept in which modern architecture goes hand-in-hand with the optimum indoor climate. And we can conclude that this has been achieved with complete satisfaction. The owner, the occupants, neighbouring residents as well as ourselves can look back on a fine and successful reference.”

All in all, therefore, it was entire fitting that De Amazones should have won the Den Bosch Architecture Award for the most talked-about project built in the period between 1995 and 2015. An accomplishment that, as a partner on this project, DUCO can also be justifiably proud of!