The demand for new build in large cities is increasing at an explosive rate while the available open space becomes scarcer. As a result, ever more projects are being forced to move to noise-sensitive locations. 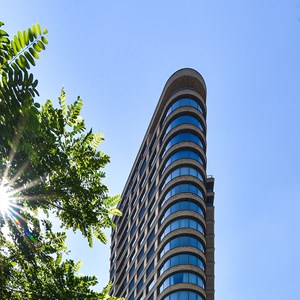 The demand for new build in large cities is increasing at an explosive rate while the available open space becomes scarcer. As a result, ever more projects are being forced to move to noise-sensitive locations. These are locations which, on account of the prevailing noise levels, are less suitable for 24-hour residential use. The same applies to the State residential tower block in Amsterdam. Consultants Buro Bouwfysica and DUCO Ventilation & Sun Control joined forces to jointly seek out a feasible solution for comfortable living at this location despite everything.

Building land available in city centres such as Amsterdam is becoming scarcer. The remaining locations are less suited at first sight for residential building, such as along the A10 motorway right next to it or to the north of the IJ waterway, directly opposite the Westport industrial estate. These are locations which, on account of the prevailing noise levels are less suitable for residential use. The same applies to the State residential tower block. There are nonetheless good feasible solutions to build on these locations despite everything. The requirements can be met by means of what is known as a quiet side, also referred to as low-noise.

“What is unique to the State residential tower block, is that the low-noise façade is formed by part of the façade that is screened off”, says Jan Hardlooper, acoustics consultant at Buro Bouwfysica. “This was an exception to the general rule in the preliminary process for the permit application. This rule states that the entire side of a dwelling must be low-noise. Meanwhile, the Amsterdam municipal authority amended its policy, based partly on implementation practice in projects such as State, such that a quite side can be created by screening off part of the façade. On one condition! A section which can be opened must be included in that part of the façade, which has sufficient capacity to air the space behind it in accordance with the requirements of the Building Decree. The use of sound-absorbing wall louvres comes to the fore in this scenario.

Not only must the louvres achieve a high level of soundproofing, they must also allow high airflow through them. “Accordingly, this means airing without any detrimental impact on acoustic comfort”, adds Edwin Pelkman, project consultant at DUCO. “A low-noise outdoor space was not mandatory, but a low-noise façade was. Because a “deaf façade” (no opening windows) is not required, various alternatives could be compared with one another. Acoustic wall louvres were greatly preferred over traditional solutions such as screened-off balconies or noise screens integrated into the building. ZZDP Architects chose to include high-grade brickwork in the flat façade. The louvres are therefore incorporated in the façades which are adjacent to the loggias.

“The choice of louvre went to the Duco Acoustic Panel 300”, continues Jan Hardlooper. “The spaces behind the louvres must be capable of being aired via the louvre (3 l/s.m2 of floor space). The required noise reduction by the louvre is required to be 13 dB for the rail traffic spectrum. Thanks to their heavy-duty configuration, the 131 Duco Acoustic Panel 300 achieve an acoustic absorption value as high as 17 dB. We are extremely satisfied with the result. Acoustic tests were conducted subsequently on the façade soundproofing, with doors behind the louvre open and closed. The measured result matched our calculations. The requisite noise reductions have been achieved and the residents can air and ventilate their homes without high noise levels”, concludes a satisfied Jan Hardlooper.