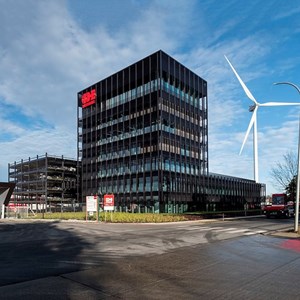 Future-proof head office with a nod to its mining past

To secure its growth and future, Genk-based logistics service provider H.Essers decided to build a new head office. It had to be a sustainable architectural pearl that would fit perfectly into the local context and evoke memories of the industrial mining past. The facade of the building was completely covered with black rectangular DucoSun Cubic 150 slats.

The corona crisis tested the patience of the Limburg family business. In mid-2021, the new head office could finally be put into use. On the existing site in Genk-North, an attractive, future-oriented building was erected, which presents itself as a model of sustainability. "Optimal use of space was the objective, so we decided to build upwards," explains Salvatore Napolitano, Chief Procurement Officer at H.Essers. "The new head office was built on the site of an old, single-storey car park. With a height of 30 metres and six floors, the new building offers 4200 m² of useful space. A new parking tower, designed in the same style, meets the need for additional parking space."

Steel and exposed concrete as finishes

A unique, future-proof building that reflects the identity of H. Essers and its history. "Every choice made testifies to the dynamism, ambitions and constant pursuit of efficiency, sustainability and quality that typify the company," says Michel Bylois, architect-manager at ILB Architects. Taking the Genk industrial landscape with its characteristic terrils as a starting point, the architectural firm opted for raw materials such as steel and exposed concrete, which create a specific look and experience. The black facades and high windows are a nod to the region's mining past. The strength of the logistics sector was also incorporated into the design as much as possible, e.g. through ceilings with concrete ribs and a floor in cut concrete.

The façade construction was worked out in detail. "A major concern was the cast shadow from the wind turbines on the site - which sometimes caused annoyance in the former company building," explains Bylois. "At the same time, it was important to provide sufficient light and air. That is why we opted for a double façade quite early on. The outer shell in concrete and glass is flanked by a steel façade consisting of strategically positioned, horizontal, black DucoSun Cubic 150 louvres. Partly inspired by the Ghent library De Krook. They provide a pleasant interior experience (without restricting the view) and make a valuable aesthetic contribution."

The top of the building's facade was dressed with black rectangular DucoSun Cubic slats. These aluminium slats have a double function. On the one hand, they serve as sun protection and prevent people from looking in. On the other hand, they provide a playful dynamic and a special appearance.